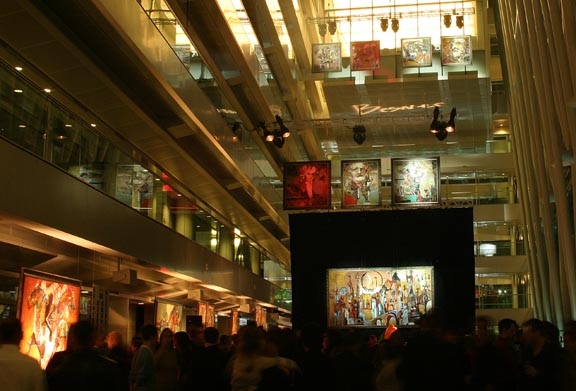 The Excess of the Coveted

More than 30 new canvases will be unveiled during a special performance orchestrated by Christian Verronneau, an artistic director well known to the Montreal fashion world. Christian is creating a spectacular event unlike any traditional vernissage, with the haunting violin of Eugene Draw, a fiery young Russian virtuoso. “In a sense, we are staging Besner’s works". The public will be invited to discover the immense canvases as if they were stars blazing in the impressive hall of the Caisse de dépôt. The entire opening will be larger-than-life, from the drinks to the hors d’oeuvres, the guests will be literally plunged into Besner's universe. Several firsts Besner, whose work has been shown around the world, will be presenting this new collection in the spectacular Caisse de dépôt on Place Jean-Paul Riopelle in Montreal. With its imposing architecture, the building is the ideal setting for paintings of this scale and a perfect parallel to the spirit of the artist who has affinities for the art of the past while trail-blazing for the future. This is also the first exhibition presented by the Caisse de dépôt et de placement du Québec in collaboration with Mensi&Rioux.